FOOD, FUEL AND FARMING: The Sky’s the Limit

May 29, 2008
Sometimes, the answer to a complex problem is so simple, so elegant that you wonder why you didn’t think of it yourself. That was my reaction yesterday as I sat at the World Science Festival Summit and listened to Columbia University professor Dickson Despommier describe an ingenious idea that could ultimately ease the world’s food, water, and energy crises.

"The Living Tower" by SOA Architects

He calls it vertical farming, and he wasn’t talking about growing pole beans. This is agriculture on the 34th floor of a big city skyscraper. Despommier has been working on vertical farming for more than 10 years, inspired by population experts that foresee over 9 billion people on the planet by 2050.

The environment also benefits since there’s no need for pesticides and other harmful chemicals, you give the land back to trees, shrubs and other natural species, and you use less water for irrigation since you can recirculate. And of course there’s the “buy local” idea. You won’t have to truck crates of veggies 3,000 miles so that New Yorker’s "The Living Tower" by SOA Architects can eat asparagus in November. I can see it now—the Flatiron building will be the gateway to Silicon Aggie, a farm stand on the corner of 22nd and Broadway.
"The Living Skyscraper: Farming the Urban Skyline" by Blake Kurasek 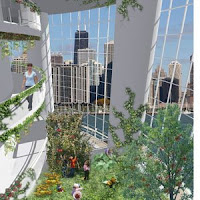 As our intellectually-challenged government officials continue to screw up our food supply by making corn into ethanol and sending food prices through the proverbial solar roof; and as they green light an outrageous $300 billion on farm subsidies, Despommier’s plan becomes even more attractive, if not urgent. If the U.S. government can’t see the root of the problem, Dubai probably can.

The Emirates seems to be funding all the good ideas lately with their windfall petrodollars. Ironically, they knew what was coming and they actually planned for it. They knew we would not end our dependence on oil when Jimmy Carter was president and Americans were facing gas shortages, gas rationing, a serious recession and no alternative energy policy was implemented.
So before we all have to start speaking Arabic, or Chinese or Hindi because we’ve sold America to the highest foreign bidder, let’s try to plan for our future. One good idea belongs to Dickson Despommier. Let’s help it grow.
Carbon Footprint Farming Food Food Crisis Green Urban Agriculture