Showing posts from October, 2017
Show all

Star Wars: In a Galaxy Far, Far Away, a Collision of Two Neutron Stars...

An amazing look at two neutron stars in a head-on collision. Were they mating? Or dancing their lives away into a black a hole?
Post a Comment
Read more

The National Football League took in $13 billion in revenue in 2016 , nearly three times as much as the NBA and 37 percent more than Major League Baseball. The NFL’s commissioner and chief negotiator, Roger Goodell, the guy reviled by Tom Brady and network television CEOs alike, made a salary of nearly $32 million in 2015, not including his massive expense account. With the big money dangling like a gold ring on a carousel, you would think nothing could stop kids from wanting to reach for that ring. Nothing except Mom and the American Academy of Pediatrics , who want to prevent children from getting head injuries. Concussions have come out of the shadows of X-rays and into the light of functional MRIs and PET scans, where the damage from repeated head trauma can be traced. Parents realize that no amount of money can stop the shaking from Parkinson’s disease or cure Alzheimer’s and related cognitive disorders that can result from multiple concussions. If a lot of kids stop p
1 comment
Read more 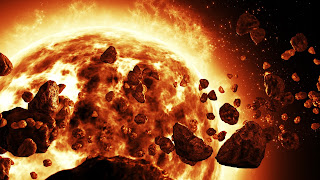 In 1859, Richard C. Carrington, a British astronomer, observed and recorded a major geomagnetic solar storm that produced a white light flare. The next day, "auroras could be seen in tropical latitudes and telegraph systems all over the world, starting to shock telegraph operators, operating while unplugged, and igniting the telegraph paper," according to a recent public interest report by the Federation of American Scientists. The author of the report, Robert Coker, a former aerospace engineer for NASA Marshall Space Flight Center, says solar flares are known to have detrimental effects on satellite operations, GPS systems, hi-frequency airplane communications, navigation, and for good measure, the electrical power grid. Coker calls sun flares and other electromagnetic disruptions space weather events. Minor events occur almost yearly, he says, resulting in GPS disruptions and rerouting of aircraft. More significant events occur once a decade, with extended local outag
Post a Comment
Read more
More posts